No Result
View All Result
Home How to Instagram

Follower And Following List – All You Need To Know

Instagram, a popular free service for sharing photos online, was purchased by Meta (Facebook) in 2012. Through a mobile application, Instagram enables users to edit and publish photographs and brief films. It may seem silly to define these concepts, but Instagram has a steep learning curve for new users. New users wonder about what are Follower and Following list on Instagram.

Regarding how the Instagram Followers list is sorted, there is a bit more going on behind the scenes.

For several accounts with fewer than 200 followers, the Instagram Followers list will be sorted alphabetically by profile names. Not by actual usernames, but rather by the precise name stated on their profile. If they have not entered a name or have left it purposely blank, their profile will display at the top of the list of followers, followed by their followers’ first names in alphabetical order.

However, this is not always true, even for some accounts with fewer than 200 followers. This is especially true for accounts that were created several years ago. Currently, Instagram’s algorithm is to fault if you inspect a list of followers and find that it appears random. More often than not, this is what has been occurring recently.

In 2022, Instagram employs artificial intelligence (AI) and a complicated algorithm to determine the order of the list of followers. Consideration is given to three key factors. These include your relationship, your relevancy, and your most recent interactions.

If this is the case, Instagram thinks that you are already familiar with them. Therefore, the accounts that follow you will display at the top of the list, increasing your chances of viewing their profile and maybe following them shortly thereafter.

Interaction is another important factor that will put certain accounts at the top of the list. An interaction can be a direct message, a like, or a comment. If you and another account frequently like or comment on the same posts, you will likely find them at the top of the list of followers. Regardless matter whether you’re following them or not, Instagram will analyze your interaction patterns and place these accounts at the front of your feed.

This is the case if the user is being followed by an account that you also follow. When Instagram detects that you’re following the same accounts, it indicates that you have a mutual interest.

The actual geo-location of other accounts is also considered by Instagram’s algorithm for determining follower lists. Priority is given to accounts that share the same location as your own. If you examine a list of followers and there are no other characteristics in common, your geographic location is considered.

For instance, if you are situated in the United States but the account you are viewing is headquartered in the United Kingdom, American individuals will appear at the top of the follower list. This is only visible when the geo-location is relatively close, often by city, state, or nation. Geolocation is not a significant factor, but it is still a factor, although a little one.

Follower and Following List refers to the list of Instagram users whom you follow; their posts appear in your feed, and you have the option to view their profile. You can send these users direct messages, but if they do not follow you back, they may have to accept the message request before answering. 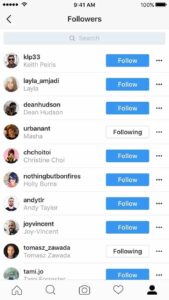 Currently, in 2022, Instagram orders the Following list for third-party accounts you’re viewing depending on mutual interaction. For example, accounts that you often like or receive likes from are pushed towards the top.

Simply click the Following number on your profile page to reveal two clickable arrows. This will bring up the “Sort by” function, which allows you to sort your following accounts by date.

Maintaining A Ratio Of Followers To Followers

In general, an account with a large number of the following but few followers is considered to be of low quality or possibly false. In general, a follower-to-followed ratio of 1:1 is considered normal for a social media account. These users could be celebrities or Instagram influencers if they have much more followers than they are following.

When Does Follower-to-following Ratio Matter?

Businesses, brands, and Instagram influencers, on the contrary side, try to maintain a good follower/following ratio (more followers than they are following) to promote their account and let other followers know that they are an account worth following. The follower/following ratio on Instagram is merely a reflection of your reputation on Insta as a cool account or, if your ratio is poor, as a spam account that follows people but is not followed back.

Can Someone See If You Send Their Instagram Story

Why People Can't Hear Me On My iPhone?