How To See Missed Calls From Blocked Numbers On iPhone?

How can we see missed calls from blocked contacts on our Phone? Whenever a blocked number calls you, you cannot see that they called you. When you block someone’s number, each and every type of interaction (calls, messages, Facetims) they do will be blocked, you will never be notified about them.

While trying to call somebody, you might have come across the situation as to how to see missed calls from blocked numbers on iPhone. When you block someone, you set your phone’s setting so that their caller id no longer tends to appear in your call history, as the purpose of blocking is to prevent them from calling you.

How To Check Blocked Phone Calls?

Unfortunately, it is very difficult to get a missed call notification from blocked contacts on iPhone. No such feature is available on the platform which helps remedies the situation. When someone is blocked, no matter how many times they call, you will never be notified that they called you.

Unblocking these numbers is required to view them. Once they attempt to phone you while they’re not blocked, you’ll be able to see missed calls from them, but you’ll know when they’re calling you because you will be notified of the call. On their side, they will hear beeps of call in progress instead of sudden busy tone and switch to voice mail.

Because the calls were immediately disconnected, they will never appear in your iPhone’s call history. In the iPhone’s call log or records, failed calls will not be saved in the call log. 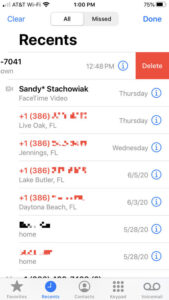 As soon as you block a phone number on your iPhone, that person will no longer be able to reach you via call, message or Facetime. You and the blocked individual cannot send or receive phone calls, text messages, or FaceTime calls.

If you have blocked a caller, they will be immediately disconnected or forwarded to voicemail if they call your iPhone. Because it was automatically blocked, the blocked call will not display in your call log.

Successful calls are then displayed in your iPhone’s call history. Dialed, received, and missed calls are instances of “successful” calls. The recipient of a missed call is the person who received but did not answer the call. There is no need to question whether blocked calls will appear in the iPhone’s call history, as they will not. A blocked phone number will only be reflected in call records for calls made after the block was applied.

How To Unblock Someone On iPhone?

Step one is to launch the Settings application from the iPhone’s home screen. You can click the Phone icon. It contains more opportunities. Navigate to the Blocked Contact option by drop down menu.

When you tap Blocked connection, you will be directed to the list of blocked contacts. Left-swipe on the blocked contact you wish to unblock. This gives you the option to unblock them. Tap the number to clear it.

Overall, the following are the steps:

How To Check Text Messages From Blocked Number?

To view recent text messages from a blocked contact, you must first enter the settings app via the iPhone’s home screen. At the bottom of the settings screen, select the Blocked option, followed by Recent Messages. You will see a list of all recent messages sent by blocked contacts when you select the Recent Messages option. Select and read the news that you feel most important.

Alternatives To Blocking Someone:

Use Do Not Disturb Mode:

This is a very good approach to filter calls as compared to choosing specific spam callers from your contact list. Unfortunately, activating Do Not Disturb mode has the negative effect of turning off notifications. Apple may enable consumers to only receive calls from their approved caller list as part of an allowlist function. Nevertheless, the Do Not Disturb option has the undesirable effect of momentarily suppressing all calls and related notifications. 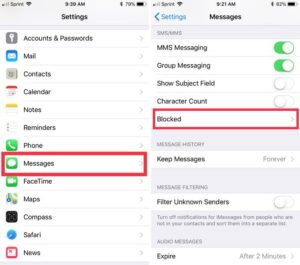 Do Not Disturb has the same effect as blocking, except you can still monitor missed calls.

Put Your Phone On Silent:

On the iPhone, you can instead view incoming calls, SMS messages, and alarms and feel a low-pitched vibration. You will still receive calls and text notifications but no notification sounds will be played.

What is the difference between setting your iPhone to Do Not Disturb and silence? The “quiet” option of the iPhone reduces the amount of noise, vibration, and light it emits. In silence mode, vibrations substitute sounds, while “do not disturb” stops all notifications (such as vibrations and lights). Use the desired option for desired outcomes.

How To See Someone's Recently Added Friends On Facebook?

Can’t Swipe On iPhone – Fixes You Should Try