Snapchat Recents – All You Need To Know

The Snapchat recents list displays your most recent chats with friends and those who have recently become your friends on Snapchat. People you haven’t spoken to in a while may reappear for various reasons.

If you use Snapchat, you probably have many people on your recent list (Chats list). This shows all your conversations with others, particularly the most recent ones.

What Are “Recents” In Snapchat:

Recent is the list of Snapchat users with whom you have recently talked to. When you speak with someone, their conversation is moved to the top of your list so it can be easily accessed.

If you have not spoken to someone in a while or have never spoken to them, their name may appear here. It also displays any unopened snaps from your friends.

The list is identical to your chats. The term can appear for various reasons if you see a friend’s name on the Snapchat Recents list.

Why Is Someone You Have Not Contacted Recently Showing On Recent List In Snapchat?

If someone appears in your recent when you haven’t talked to them, there can be plenty of reasons why they occurred. Some of them are as follows:

They Removed You From Their Friends:

If someone appears in your recent even though you haven’t spoken to them in several months/weeks, it is because they have removed you as a friend. When a contact removes you as a friend, their name will appear in your recent to indicate that something has occurred recently with that contact.

You Recently Added Them As A Friend:

They Replied To Your Story:

If they recently responded to one of your stories, this may explain why they are included in your most recent conversations. Snapchat displays the current users with whom you have talked recently, so if they replied to your story, this is another reason you will see them there.

A Glitch In The Snapchat App:

A common reason for seeing someone in your recent conversations is that Snapchat is malfunctioning. Snapchat is notorious for frequently displaying content that is not intended to be displayed. If someone in your current situation is not there for one of the reasons listed above, then there is a problem with Snapchat.

They Deleted The Message After Sending It:

Steps To Take If The Snapchat Recents List Is Wrong:

If the recent list is incorrect, the Snapchat app is likely experiencing a glitch or bug causing a person you have never spoken to appear on your conversations list. There are several ways to eliminate a bug and resolve the ongoing issue with Snapchat.

It Probably Is Correct:

First, check Snapchat’s recent list. You must check if someone has removed you. Snapchat sends someone who draws you to the top of your current list, even if you haven’t spoken to them recently. If the person hasn’t cleared you, it’s a glitch, or they’ve recently added you.

Check If The Servers Are Experiencing Issues:

If someone hasn’t removed or added you, there may be a glitch within Snapchat, sometimes caused by Snapchat’s servers being down. Snapchat typically performs routine maintenance, which may cause service interruptions.

When Snapchat is unavailable due to routine maintenance, social media will be flooded with complaints from users experiencing the same issue. To determine whether Snapchat Servers are offline, a simple Google search for “is Snapchat down” will suffice.

A few news websites report that Snapchat’s servers are down. If you are active on social media, your friends will be discussing Snapchat, or you can go to the Instagram search bar, enter Snapchat, and click on tags. 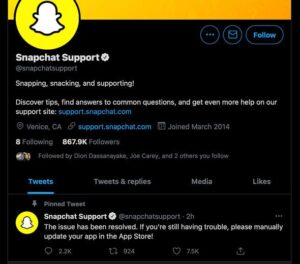 Updating the app is another way to eliminate any Snapchat bug that causes the recent list to be incorrect. When a Snapchat update is available, your current version likely contains a bug. New updates are released to fix bugs and add new functionality. If you are not using the most recent version of Snapchat, you may encounter numerous issues.

Here is how to update Snapchat should one be available: 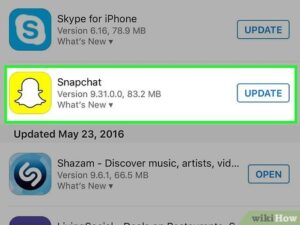 Once the app has been updated, open Snapchat to check if a Snapchat contact is still on your recent.

Recent refers to the group of Snapchat users you have recently communicated with. As you interact with a person, they rise to the group’s top and become immediately accessible.

There can be cases where you might think that the recent list is wrong; in that case, you can update or reinstall your app. If it is still incorrect, try the abovementioned methods to fix the problem.

Liquid Detected In Lightning Connector - Fixes You Should Try

Why Does My Phone Keep Hanging Up?

Email Keeps Crashing On Phone – Fixes You Should Try