Facebook is a social platform on which we can share photos, videos, and stories. Also, we can chat with people all over the globe. While chatting with someone sometime we send the wrong message to them. In case you are not aware, Facebook has an “Unsend” feature that can be used to unsend Facebook messages.

Because every Facebook user has probably experienced the dread of inadvertently sending a message to a Chat communication that was meant for somebody else, it is fortunate that the company provides users with the ability to retrieve errant chats and remove them from the view of one or all of the parties involved in a conversation. Users can save face online by not having to fully shut Facebook Messenger out of humiliation. All that is required is a few reasonable limitations to make this possible.

Users have had the ability to Unsend previously sent messages since 2018, but at that time, they had only 10 minutes after a message was delivered to do so; after that, it was permanently logged. Users now have the option to permanently conceal messages from everyone’s view by selecting the “Unsend for Everyone” option, or they can temporarily hide messages that they no longer want to see by using the “Unsend for You” option.

In the case that sent messages on Facebook need to be removed, remove them ASAP preventing the recipient of the message from seeing the message you sent. In the case that they’re currently online, there’s a good possibility that they have received and read the message, sooner you take action, the lower the likelihood of that being the case. Even though they can follow different methods to find out that you have unsend a message that you have sent to them.

Facebook has made it easy to unsend a message, and the procedure works in a manner that is comparable to how unsend other types of messages works. 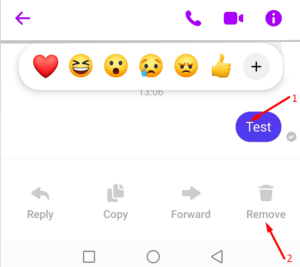 For Facebook in a web browser, the following applies to you:

You will no longer be able to restore a message that you have unsent once you have done so; thus, you should make sure that the message is not anything that you would need to save as proof. Messenger does not offer a tool that allows users to bulk unsend messages, so if you were hoping to cancel the sending of several messages at once, you will be disappointed to learn that this is not possible.

When you send something that you weren’t intending to send, several questions that may run through your head. If you know what really goes on in this circumstance, it might help ease the worry that you feel about it.

The Notification After Deletion:

What Does It Mean About Unsending A Message You Already Sent? This is the message that will be sent to the receiver in place of the one you accidentally sent when using the Messenger undelete feature. Unlike Instagram, which does not notify the recipient of an unsent message.

Why can’t I Unsend a Message On Facebook Messenger?

There is a possibility of an issue occurring on Messenger whenever you attempt to retract a message by clicking the “unsend” button. This prevents the message from being delivered. It appears that you do not have an internet connection. Which is the primary obstacle preventing you from cancelling the sending of this mail.

Switching from using Wi-Fi to using data is the first step you may take to resolve this issue. When you go from using Wi-Fi to using data. You are switching to a source of the internet that is dependable. If there was a problem with your WIFI. Switching networks can help you get rid of the problem and will permit you to unsend the message that you sent in your Messenger.

Can People See When You Look At Their Instagram?